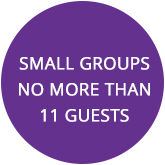 Our Melbourne City Tour takes you through the wondrous sights of Melbourne. Learn about the city’s fascinating history with your expert Oceania guide. With your small group, take a stroll in the gardens, see some of our world famous attractions like Albert Park Lake (Formula 1), Federation Square and visit Eureka Skydeck 88 (optional).

Welcome to Melbourne, a city of contrasts, world famous sporting arenas and historic gardens. Be dazzled by the wondrous sights of Australia’s most vibrant city and learn about Melbourne’s fascinating history with your expert guide.

Firstly, your Oceania Guide will pick you up from your Melbourne hotel before you embark on your city discovery.

By choosing a small group tour with Oceania, you will make the most of your time in Melbourne.

After pick up, your guide will drive you in and around the City, allowing you to see some of Melbournes iconic sights such as Federation Square, the MCG and our world-famous sports precinct.

Your tour will finish by visiting Melbourne’s famous Eureka Tower. You can purchase a ticket on the day to scrape the sky, allowing you to see the awe inspiring skyline at Eureka Skydeck 88 where you will be spoiled with 360 degree views of the City, Port Phillip Bay and out to the Dandenongs and the Yarra Valley.

There will be a maximum of 11 people in your group, so you will have plenty of opportunities to ask your guide questions and get to know your fellow travellers.

Melbourne is the capital city of Victoria, a state in the south-east corner of mainland Australia. It is the second largest city in Australia with around 4 million residents.

You will soon discover why Melbourne has repeatedly been voted the world’s most livable city. The city boasts a bustling cosmopolitan business district, a vibrant cultural and artistic scene, vast park lands and eclectic inner-city precincts.

Melbourne is known as the sporting capital of Australia as it hosts events such as the Australian Open for Tennis and the Formula 1 Grand Prix.

Melbourne is also synonymous with the country’s best coffee as can be seen in countless funky cafes. The restaurant scene is world-famous with fabulous modern fusion options.

Some history about Melbourne

Melbourne pays tribute to the Kulin Nation, the traditional owners of the land where now sits this bustling metropolis.

Today Melbourne welcomes people from all over the world and continues to be a significant meeting place.

Today’s city was founded on the Yarra River in 1835 following the smaller settlement in Sorrento on the Mornington Peninsula in 1803.

Melbourne boomed in the 1850s as a result of the impressive Gold Rush, attracting gold diggers from around the world. 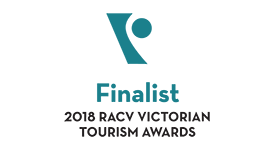